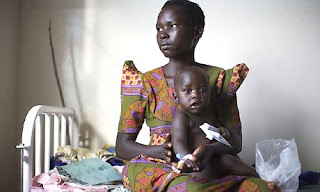 By far, the most catastrophic evil wrought by the radical environmental forces is their success in banning DDT throughout the world. For in doing so, this irrational green movement has guaranteed the deaths of millions of people.

Here's an excellent primer on this crucial matter.

Imagine losing millions of Americans to malaria. As recently as the 1940s, malaria thrived here in America, afflicting many. Fortunately, we were able completely eradicate it, ending needless suffering and death. How? Through some fancy, expensive, high-tech process? Not at all! Malaria was eradicated in the United States through the diligent application of a simple and very cheap insecticide: DDT.

The Centers For Disease Control (CDC) was formed in 1946 specifically to fight malaria. Its primary weapon was DDT, which it sprayed on over 4.5 million American homes. It worked, and by 1951 malaria had been eradicated from the United States. Since then, a variety of green groups have waged a campaign to ban this valuable weapon, and have succeeded to a large degree. Ineffective bed nets are in. DDT spraying is out. CFACT's experts explain in the following articles why reinstating DDT as a tool in the fight against global malaria is a matter of life and death...

And if you're thinking that the leaders of the radical greens aren't aware of the implications of their anti-DDT campaign, consider this post from Wesley J. Smith's blog, Secondhand Smoke:

Nature had a discussion about whether humans could–or should–wipe out mosquitoes, since they cause us so much harm. I would hesitate to wipe out any species based on the potential ecological consequences and balances, while certainly would support eradicating or deeply reducing the populations of the vampire insects in areas where they spread deadly diseases such as malaria–which kills about 1 million people a year–yes, even if it costs birds and bats some food.

But the animal rights terrorism advocate, Jerry Vlasak, opposed it because wiping out mosquitoes would benefit humankind, as he supported Chinese tyranny over human reproduction. From the story in the Daily Caller:

"Another animal rights proponent, Jerry Vlasak, spokesman for the North American Animal Liberation Press Office, went further. 'They would have us believe it’s either the mosquitoes or us. That’s just not the case. For one thing, there are way too many people on the planet,' Vlasak said. Vlasak said more attention should be focused on the problems of overpopulation instead. 'One of the problems is, they send 1 million pounds of food to Somalia and all they do is reproduce and pretty soon there’s going to be more people suffering there. China is sort of an example where they were able to stabilize the population with governmental standards,' Vlasak said."

Once again, a leader of the animal rights movement-albeit on its most radical flank–demonstrates a profound anti humanism that opposes aid to hungry people in Africa as he supports forced abortion and infanticide in China. Amazing.
Posted by DH at 10:37 AM