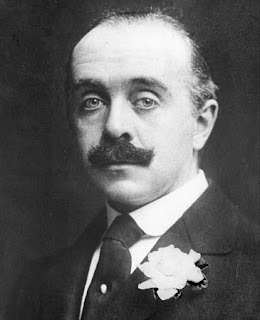 One of the most delightful notes I've ever read was one I came across while looking through the G.K. Chesterton folders in the British Museum a few years ago.

The note was in a beautifully flourished handwriting on indiscriminate sides of a card. It was directed to Chesterton from the irrepressible drama critic, radio broadcaster, artist, sometimes author, and forever bon vivant, Max Beerbohm.

I have seldom wished to meet anyone in particular; but you I should very much like to meet.

I need not explain who I am for the name at the end of this note is one which you have more than once admitted rather warmly into your writings.

By way of personal and private introduction, I may say that my mother was a friend of your grandmother, Mrs. Grosjean and also of your mother. As I have said, I should like to meet you. On the other hand, it is quite possible that you have no reciprocal anxiety to meet me. In this case, nothing could be easier than for you to say that you are very busy, or unwell, or going out of town and so are not able as much as you would have liked to lunch with me either next Wednesday or next Saturday at 1:30.

I am, whether you come or not,

P.S. I am quite different from my writings (and so, I daresay are you from yours) so that we should not necessarily fail to hit it off. I, in the flesh, am modest, full of common sense, very genial and rather dull. What you are remains to be seen – or not to be seen by me according to your decision. Any answer to this note had better be directed to 48 Upper Berkley ST W for the porter of this club is very dilatory.

Another quick note, dated somewhat later, seems to confirm that Mr. Beerbohm's invitation to lunch (and moreover to a congenial friendship) was graciously accepted by Mr. Chesterton.

Wrote Beerbohm, “I think The Flying Inn is quite one of the very best of all your things. I constantly – though melodiously – sing snatches from the songs that are there.”
Posted by DH at 12:41 PM