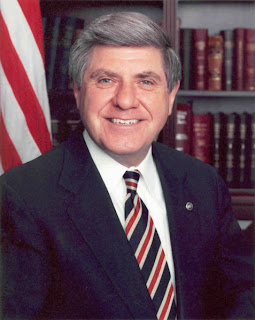 Though there were only 7 of us sitting around the table and though it only took about an hour and a half of actual writing, we produced over 160 letters! Sure, that involves carbon copies of letters that will be sent on to others, but still 160 letters will be received by Senators, Congressmen, the President, business leaders and Christians in Communist and Islamic countries who are imprisoned for their faith. That's fantastic production.

But just think how much higher the count would have been had you shown up!

In the next few days I will be printing a few of those letters, beginning with this one and a couple in the subsequent posts below.

I notice that you are not a co-sponsor of Senator DeMint's resolution (S.R. 519) which opposes ratification of the notorious and badly misnamed U.N. Convention on the Rights of the Child.

For goodness sakes, why not?

After all, this Convention is severely undermining not only national sovereignty but even the sanctity of the home. For instance, as you are no doubt aware by reading Sen. DeMint's Resolution, the U.K. was determined to be in violation of the Convention because British law allowed parents to opt their children out of sex ed classes they deemed inappropriate or offensive.

So, Senator Nelson, please take this common-sense stand for freedom (which is clearly in the best interests of the United States) and take a stand against mind-numbing schemes of tyranny as hatched by foreign bureaucrats. Please become a co-sponsor of S.R. 519 today.

Or, at the very least, please explain to me why you wouldn't do such an honorable and responsible thing, one that a large majority of Nebraskans would certainly want you to do?