Obama: No Church, No Press, No Skill in the Bunkers 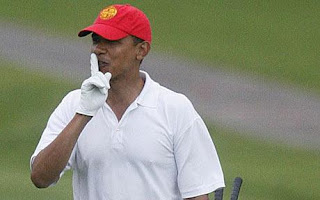 Another Sunday, another missed opportunity for President Obama to prove to America he’s not a Muslim.

But instead of attending church services at one of the dozens and dozens of quaint, island Christian churches yesterday morning, the commander in chief hit Our Lady of the Fairways, aka the Vineyard Golf Club, yet again, to play 18.

Obama again teed off with Chicago pal Eric Whitaker and aide Marvin Nicholson . Rounding out the foursome was Bill Lewis, a regular Vineyard vacationer who played with Obama and Whitaker last year. Once again, the press corps was kept far, far away from the presidential golf party.

Perhaps the Leader of the Free World is a little sensitive about his game. Because our spies report that Barry was hacking away at a ball in the bunker on the 12th hole...before giving up and throwing it onto the green. Shades of Bill Clinton!...

Now you’d think, with polls showing that one in five Americans believe Obama is a Muslim - and with the furor over the president’s flip-flops on the Ground Zero mosque - that his White House handlers might have orchestrated a nice little photo op of the first family doing a little vacation worshiping yesterday morning.

Because, despite the administration’s insistence that Barry is a Christian and that he prays daily, most Americans have noticed that Obama rarely attends church. That’s a noticeable departure from previous presidents, such as George W. Bush and Clinton, who were on their knees every Sunday.

Of course, the last time Obama had a regular church, it was Trinity United Church of Christ in Chicago of the Rev. Jeremiah Wright fame, and, well, we all know how that turned out...