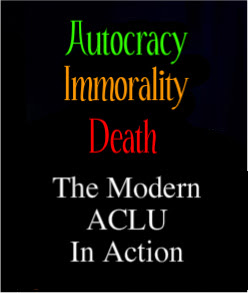 It seems that the Department of Health and Human Services is tightening the screws on religiously affiliated hospitals to force them to perform abortions.

This Citizen Link story has the details, including the unsurprising news that the ACLU is one of the key players in the drama. The misnamed civil liberties organization (unjustly selective in just whose "liberties" they wish to protect) is urging the government to ignore freedom of conscience, deliberately subvert freedom of religion, and grossly misinterpret the Emergency Medical Treatment and Active Labor Act in order to require religious hospitals to kill preborn boys and girls.

Not, of course, that the Obama administration needs any further encouragement to promote abortion.

Bill Donahue, president of the Catholic League, comments, "We live in a day and age of militant atheism. There are people in our society led by the ACLU. They’re not alone in wanting to basically impose a secular agenda on American society. They are anti-Christian. They are expressly anti-Catholic. And now what they’re trying to do, of course, is basically to shut down Catholic hospitals or ask them to prostitute their own doctrinal prerogatives."

"President Obama, when he went to Notre Dame University here a year ago, said that he believed in conscience rights. Well, now we’ll find out. No religion should have to compromise its rights and check its doctrinal prerogatives at the church door."
Posted by DH at 11:50 AM