Obama Administration Is Cold as ICE 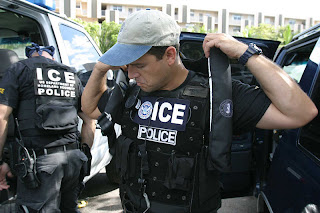 Jerry Seper over at the Washington Times has one of the "Wow" articles of the day, a story which has a government employees union dramatically disowning the corruption of the Obama administration. Check it out.

The union that represents rank-and-file field agents at U.S. Immigration and Customs Enforcement has unanimously passed a "vote of no confidence" for the agency's leadership, saying ICE has "abandoned" its core mission of protecting the public to support a political agenda favoring amnesty.

The National Immigration and Customs Enforcement Council of the American Federation of Government Employees, which represents 7,000 ICE agents and employees, voted 259-0 for a resolution saying there was "growing dissatisfaction and concern" over the leadership of Assistant Secretary John Morton, who heads ICE, and Phyllis Coven, assistant director for the agency's office of detention policy and planning.

The resolution said ICE leadership had "abandoned the agency's core mission of enforcing U.S. immigration laws and providing for public safety," instead directing its attention "to campaigning for programs and policies related to amnesty and the creation of a special detention system for foreign nationals that exceeds the care and services provided to most U.S. citizens similarly incarcerated...

The statement also noted that:

• The majority of ICE's enforcement and removal officers are prohibited from making street arrests or enforcing U.S. immigration laws outside of the jail setting.

• Hundreds of ICE officers nationwide perform no law enforcement duties whatsoever because of resource mismanagement within the agency.

• ICE detention reforms have transformed into a detention system aimed at providing resortlike living conditions to criminal aliens based on recommendations not from ICE officers and field managers, but from "special-interest groups."

• The lack of technical expertise and field experience has resulted in a priority of providing bingo nights, dance lessons and hanging plants to criminals, instead of addressing safe and responsible detention reforms for noncriminal individuals and families.

• Unlike any other agency in the nation, ICE officers will be prevented from searching detainees housed in ICE facilities, allowing weapons, drugs and other contraband into detention centers — putting detainees, ICE officers and contract guards at risk.

• Senior leadership ignores reports that ICE internal investigations by the office of professional responsibility conceal agency and supervisor misconduct and are used to retaliate against employees who make whistleblower-type disclosures or question inappropriate policies and procedures....