Will the NFL Tackle Drunk Driving? 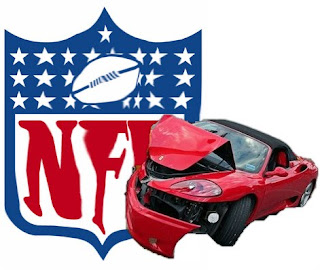 Although drunk driving arrests among NFL players are actually less than those of the general male population of the same age, it is definitely a serious problem. There is about one DUI arrest per 165 NFL players per year, making it the league's most repeated criminal action. Indeed, for the last ten years an NFL player has been arrested for drunk driving more than once a month.

And, as with every drunk driver, the repercussions can be deadly.

To combat the problem, the NFL this year began a partnership with Mothers Against Drunk Driving, marking the first time MADD entered into such a relationship with a pro sports league on a national level.

It makes for strange bedfellows. The beer industry has been a big NFL sponsor and beneficiary. But concerns about the league’s image — and a broader crackdown on player conduct — have led to a series of new measures by the NFL, including leaguewide sponsorship of a ride-home program for players a few years ago...

MADD’s relationship reached a new level with the league after Cleveland Browns receiver Donte Stallworth struck and killed a pedestrian while driving drunk in Florida last year. As a result, he was sentenced to 30 days in jail. At the time, MADD blasted the sentence for being too light and challenged the league with a statement: “This case is a clear test of the NFL’s continued tolerance of drunk driving among its players. We are closely watching what the NFL does.”

Just how serious remains to be seen. But the anticipated decision by the NFL to suspend Vincent Jackson for a whole season because of a second DUI conviction and educational programs like the one described in this article (a MADD representative who lost her daughter to a drunk driver addressing the NFL rookies) is an important and very welcome start.
Posted by DH at 10:10 AM