"When Swing Was King!" Expands its Audience 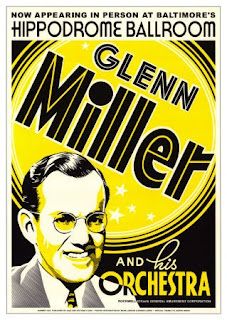 Today Claire and I headed over to the Via Christe nursing home to present "When Swing Was King!" to another audience. It was the second time around for this particular program (we had done it for Life Care Center a couple of weeks ago) and we have really been looking forward to it.

Actually, we tweaked the program quite a bit for today's event. For instance, we replaced several of the songs with better recordings. We dropped one song completely and picked up another. And then I changed probably 40 or 50 of the accompanying photos. Yes, it meant another very late night but we're delighted with the changes.

We were a lot more comfortable with the equipment too. Well, maybe "comfortable" isn't the best word. Let's say instead, we're not as freaked out about the Power Point projector as the first time. That's a big step forward.

So yes, the new and improved version of "When Swing Was King: The Sights and Sounds of the Big Band Era" enjoyed another gala performance today for about 25 residents of the facility. They had a wonderful time -- and so did we.

We hope to present it in several other places in addition to these two who have already put us on their regular calendars. We will keep this version (13 songs and over 160 images) but also create additional ones with new songs, new images, and new Big Band trivia items to entertain the folks.

And here's where you come in. Do you know of a nursing home, assisted living complex, retirement home or a shut-in single who would enjoy a musical trip down memory lane? Then please let us know. Once the programs are prepared, we can present them to as many audiences as time permits. The show lasts a little less than an hour and, of course, is presented at no charge to anybody.

And who knows? You may want to join us. The music's great. You'll like the pictures. And I can almost guarantee you'll make some new friends too. Let's face it -- these guys have had enough pills for the day, enough struggling to get around with walkers and wheelchairs, and more than enough soap operas and game shows on TV. Let's help them relax, reminisce and be re-invigorated with the music of their lives -- back in the days "When Swing Was King!"
Posted by DH at 5:36 PM