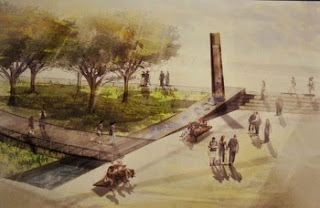 The city of Ann Arbor, like so many in the Barack Obama economy, is having a bad time of it. They are, for instance, laying off firefighters and getting rid of the city's solid waste coordinator.

Yet Ann Arbor is hiring an art coordinator. Is that position more necessary than the one handling the city's trash removal? Or the guys who will put out the fires?

I guess so. And the city council's aesthetic tastes are not yet satisfied. They're paying a German artist $850,000 for a three-piece "water sculpture" to decorate the new courthouse.

"The Public Art Commission’s Public Art Task Force invited Dreiseitl to create the proposal after they were impressed by his keynote speech on storm water mitigation at the Huron River Watershed Council’s annual State of the Huron Conference last fall. The artist agreed to the task, and the City Council unanimously approved an expenditure for him to develop the proposal for $77,000, early this year."

Tom Gantert has the bizarre tale. And over here you can see a slide show of just what this monstrosity will look like.