Reflecting on "The Man Who Was Thursday" 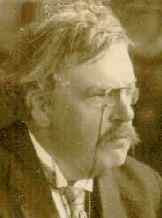 The Man Who Was Thursday is a very unusual book, one that even some of GK Chesterton’s warmest fans find inexplicable, frustrating and even a bit alarming. And though I certainly do not want to give any of the surprises of the novel away, there are a few things which I can mention that may help unlock some of the most mystifying puzzles of the novel and increase the reader's understanding and enjoyment.

First of all, it’s crucial to note that The Man Who Was Thursday has a subtitle that you ignore at your peril. That subtitle? A Nightmare. Accepting that idea right at the beginning of your reading will be a big boost in your understanding of the novel. For instance, you will not be so quick to insist on clearly defined and rational connections within the book. You’ll be more reserved in jumping to conclusions. Instead, you’ll let Chesterton lead you through Thursday’s mysterious and surreal plot, revealing the story in his own way and in his own time. Remembering the subtitle will also make you more aware of the superb artistry of Chesterton’s novel, especially the dream-like characters, conflicts and chase scenes.

The Man Who Was Thursday is most definitely a story with a moral – several of them actually. But Chesterton’s philosophy is revealed in a much different style than he used in a newspaper article, apologetic essay or public debate. And it is from a lack of appreciation for the peculiar rules of such novels of fantasy that result in so many scratching their heads over The Man Who Was Thursday. Too many readers forget that Chesterton was as remarkably skilled a poet and artist as he was a polemicist. And, as great as his passion was for communicating essential truths, he utilized all the various tools at his disposal to do so.

Thursday cannot be read in the same way as Orthodoxy or The Everlasting Man. It is a novel, a poetic flight of fancy, a genuine nightmare – but one that nevertheless makes powerful points about idealism, honor, bravery, sacrifice, justice, man’s need for fellowship and, yes, even man’s need for God.

I would even claim that the very elusiveness in The Man Who Was Thursday is a Chestertonian way to underscore man’s need of divine revelation. In other words, man can earnestly, even sacrificially search for answers about creation and about his own significance “under the sun,” but that quest will be ineffective unless God Himself, moved by His own mercy and love, reveals Himself to man. Thus, it is in the novel’s perplexity that Chesterton reveals the answer to the ultimate, critical questions. But what else should one expect from the master of paradox?

However, let me assure those of you who have yet to read The Man Who Was Thursday that the novel stands as one of the world’s favorites among G.K. Chesterton’s achievements. But not because of its philosophical weight. No, it's probably more in spite of it! And that is because the novel is such rollicking fun! The mystery is riveting; the witty and profound observations are classic GKC; the chase scenes are every bit as terrifying as in one’s own dreams; and the unexpected conclusion is as provocative as in just about any book that you’ll ever read.