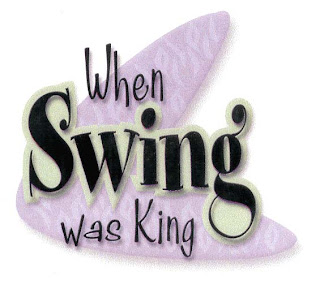 Working on new editions for our "When Swing Was King!" outreach into nursing homes and assisted living facilities has meant several days spent in looking for pictures from the 1930s, 1940s and 1950s. From my selections will come the 140-180 we will need for each 13-song presentation.

We plan to eventually have 13 such Power Point/music presentations (2 of them with a Christmas theme) so that even if we show them every month at a given site, they will not be repeated until the next year.

Finding the pictures and selecting the music has been fun -- even though sitting at a computer or scanning books can get tedious after a few hours. But it can also be an emotional experience. For, after all, these photos and the music belong to another world. They can bring back fond memories certainly, but those memories often have a poignant, even painful side. The musicians that wrote and played the tunes, the "crooners and canaries" who sang them, the audiences that listened to them on the radio or perhaps danced to them at the Palomar or Elitch's or the Savoy or Peony Park -- have almost all passed.

And the world we now inhabit is much different. It's faster paced. It's less sentimental. It's more concerned with gadgets and illusions and vicarious involvement.

And it's much more immoral.

That last is not a popular statement and even conservatives balk at saying it in public. But it is true nonetheless. Conducting a blog which must daily deal with such evils as the wholesale abortion of preborn children, the promotion by government and media of false religion, the extremities of sexual perversion played as entertainment, and the utter breakdown of civility which extends from simply losing the traditional social graces to young males continually murdering one another in the streets, makes one all too aware of social devolution.

So is it any wonder that I've found myself shedding a few tears when I look at pictures from days gone by or listening to tunes played by the big bands of the war years? I feel sadness not only for those we've lost -- Can it be I really live in a world without Roy Rogers or Bing Crosby or Jimmy Stewart? -- but sadness too for a world we've lost, a world where religious faith, ethics, social cohesion, the rule of law, a common commitment to protect children, and a love of freedom within the bounds of moral responsibility were so much more firmly embraced than now.

"When Swing Was King!" is going to be an important ministry for Vital Signs. We've already seen its impact in the facilities where we've presented it and we've been pleased to hear the excitement from the activity directors of other places who have invited us in. We are delighted to take seniors on "a sentimental journey" by sharing with them the sights and sounds of their youth. We know that doing so brings them pleasure. And we love the opportunity it brings us to build friendships with residents and staff.

"Who hears music feels his solitude peopled at once." (Robert Browning)

But I'm afraid these programs will always bring a bit of mourning too -- for loved ones passed, for youth and health lost, and for a way of life long gone.

That, of course, is where Christianity comes to the rescue. For the solidity of the Christian worldview, it's "realness," acknowledges pain and suffering and evil. It doesn't gloss over the terrible realities of sickness, deterioration, disability or death. But it does point the way to the soul's salvation (accepting by simple faith the payment for sin Christ paid on the cross) and a future which soars beyond the decay which affects this world, this culture, these bodies.

And that's why we play the music. To evoke memories that touch the hearts of senior citizens as well as our own. To bring some pleasant diversion from the pills, the pain and the loneliness that is the lot of so many living in old folks' homes. But also to create opportunities for Christian friendship in which we can share with these dear people the joys of the past and the even greater splendors of the future.
Posted by DH at 12:50 PM