Of Golf, Gentlemen and Phil Mickelson 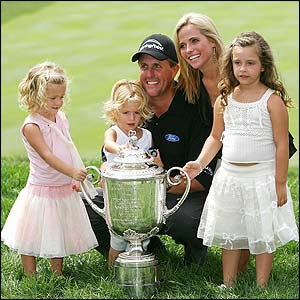 I don't play golf. But I do enjoy watching the skilled professionals who play on TV. After all, the courses are beautiful and serene. The game is decided by skill and not by the arbitrary decisions of umpires or referees. And the players are more gentlemanly, poised and in control of themselves than in any other televised sport -- there's no chest-bumping, trash talking, or throwing punches.

I also like that the competition is much broader. On any weekend, any one of dozens of guys could win and that makes the outcome more complex and interesting. The announcers are calm and, though they might get into the mechanics of the game more than a non-golfer can appreciate, they are still personable and informative.

Even the pace of the game fits our schedule. Last Saturday, for instance, I could sit downstairs and watch the tournament while also doing some internet surfing, eating a late lunch and even do a bit of work on the next morning's sermon. Nice.

Golf also reveres its history and I find that engaging. Even heroes long gone are still talked about in reverential tones and admired. And they are talked about often. Watch any tournament and you will hear about Palmer, Nicklaus, Player, Hogan, Jones, Stewart, and more.

I also appreciate very much that the PGA raises more money for charities than any other professional sport -- a lot more! That links the sport to the fans and the general community in a terrific way. And my tax dollars do not have to go for new stadiums or ballparks.

I should say too (though it's no secret to our friends) that Claire and I do root for a particular golfer more than others. (In fact, so does my Mom.) And this AP article about Phil Mickelson shows why. Come to think of it, it's an article that underscores several of the things I've said above about why I like watching golf.

Now, to be sure, I'm not going to miss the Broncos if they're on TV and we still love going to the park to watch a baseball game, but this article gives a nice perspective on why Phil Mickelson and the PGA have won us over these past few years.
Posted by DH at 12:36 PM