Jim Wallis: Paid by George Soros and Friends to Sell Evangelicals Down the River 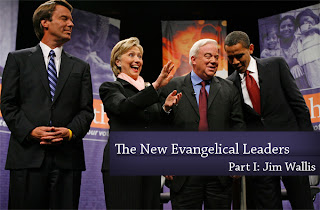 Liberal activist and pseudo-evangelical Jim Wallis is not only a representative of the worldliness and theological emptiness that has so effected the evangelical church in our time, he is dedicated to extending this apostasy further still.

I've warned readers of Wallis' heterodoxy in the past (1, 2, 3, 4, 5, 6, 7) but here are a couple of recent examples that show the increasing willingness of evangelical leaders to aid Wallis in his unholy mission. The first is the break in precedent of Lifest, an annual Wisconsin event featuring music and speakers, in avoiding controversial figures. For despite Wallis' extremely liberal views and protests which even included some sponsors pulling out of the event, he was kept as one of the keynote speakers.

It is significant to me how often contemporary Christian music is the draw to bring large crowds of people together, crowds that are then addressed by these false teachers. But because music is the tale wagging the dog for modern evangelicals (rather than theological orthodoxy and commitment to the gospel), few churches or organizations dare to complain. I applaud Q90 FM for taking the stand they did even as I am saddened and appalled at the many sponsors who shrugged their shoulders and the many pastors who failed to warn their parishioners of participating in the event.

The second issue is the revelation that Wallis' publication Sojourners has received very large grants from far-left billionaire, George Soros. Records show that Sojourners (which couldn't survive if it had to depend on its readership alone) has been given grants involving hundreds of thousands of dollars from Soros, the same fellow who has given millions to abortion, atheism, same-sex marriage, and tyrannical government schemes.

Indeed, the magazine's fortunes have soared since radical libs saw how they could use the publication to undermine evangelicalism and thus dilute one of their primary obstacles to wholesale cultural renovation.

They pour in the money and Wallis pours out the heterodoxy.

We had always thought Jim Wallis peddled liberal religion simply because he was a misguided ideologue -- a person who, like so many who profess Christianity, never really stopped loving the world and yearning to be loved by it in return. It turns out he's also getting paid handsomely for the sell out.