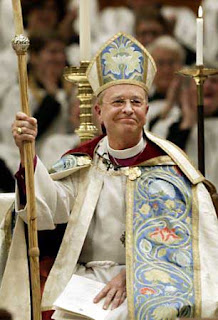 One would hope that Foundry United Methodist Church in Washington, D.C., which has been around since just after the War of 1812, would be content to continue in its honorable Wesleyan traditions. But no. They prefer to be hip rather than holy, trendy rather than true to the Scriptures. Therefore, in the middle of an “outstanding preacher” series at the church, they enjoyed last Sunday a radically pro-homosexuality sermon from the homosexual Episcopal bishop, Gene Robinson of New Hampshire.

In that sermon, Bishop Robinson severely distorted the Scriptures in order to promote homosexuality and same-sex marriage, insisted that progressives like himself were bringing inevitable change into the church, and urged the congregation to "get in trouble" for the gospel by rebelling against old-fashioned, unenlightened Methodist ideas.

Foundry United Methodist Church hosted Robinson as part of its “Summer of Great Discernment” program, a time in which the church members are "inquiring" about gay, lesbian, bisexual and transgender issues. The discernment time will conclude with a congregational vote in September to determine whether the church will host and its ministers officiate at same-sex marriages.

The ironies abound. As does the apostasy.

Here's more from Jeff Walton at the Institute on Religion and Democracy.
Posted by DH at 10:57 AM