The Will of the People Be Damned 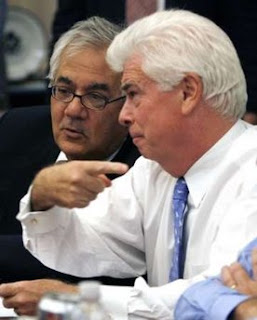 Towering examples are yesterday's passing by Congress of the DISCLOSE Act, a clearly unconstitutional abridgment of free speech that brazenly exempted certain special interest groups merely because of their political power. It was one of the most clearly hypocritical, cowardly and contemptible actions this Congress has pulled.

And, with this bunch, that's saying something!

And the second example is the "compromise" deal worked out between a handful of Capitol Hill nabobs that represents Team Obama's latest takeover bid. This time around he wants the U.S. financial system under the federal thumb. And Democrats on the Hill want to give it to him on a platter.

This even though they admit they have little idea of what it all will mean. Cue Democrat Senator Chris Dodd in a line I originally thought must have been made up by a satirically-minded conservative. Nope. Dodd actually said it.

"It's a great moment. I'm proud to have been here," said a teary-eyed Sen. Christopher J. Dodd (D-Conn.), who as chairman of the Senate Banking Committee led the effort in the Senate. "No one will know until this is actually in place how it works. But we believe we've done something that has been needed for a long time. It took a crisis to bring us to the point where we could actually get this job done."

Unless we clear the decks of these guys -- and pretty darn quick -- democracy as well as our economy is done for.
Posted by DH at 9:26 AM