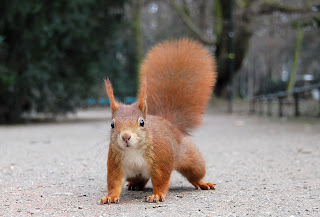 Yes, I too am standing with Arizona in her fight against illegal immigration.

But I draw the line at Arizona's complicity with the federal government in a boondoggle scheme in which $1,250,000 will be spent to try and protect a particular species of squirrel.

ABC News has the story on how the money is to be spent on rope bridges which will span the road going up Mount Graham. You see, about five of these cute little critters become road kill every year. But since there's only about 250 of this particular brand of squirrels left (that they know of), the feds are more than willing to spend a lot of taxpayer money to keep them all safe and happy.

$400,000 will thus be spent on 41 "canopy tunnel crossings" with another $160,000 to provide cameras to monitor the bridges. I suppose that leaves more than 2/3 of the funds for Obama-created jobs which can help show how the productivity of our economy is improving.

And one more thing. Call me skeptical but I can't help but wonder how the government is going to train those squirrels to only use those rope bridges. And if one or two still brave the roadway and get killed, will the taxpayers have to fork over yet more money for the next protection scheme? Where does this kind of thing stop?

Now don't get me wrong. I like squirrels. Claire and I feed them, play games with them using Ritz crackers, and I've often endangered my own life trying to preserve the life of a ditzy squirrel who ran onto the road in front of me.

But, let's face it. The founding fathers would never have allowed the federal government to use tax money to keep squirrels from getting squished. They would never even have envisioned it.