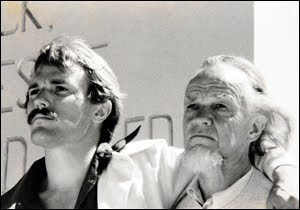 The weird deconstruction process that Franky Schaeffer is going through (the Bible simply calls it "apostasy") is an agonizing thing to watch. For like so many others who walk away from the moorings of their faith, Franky has found himself adrift in a sea of irrationality, ego, a lust for acceptance by somebody -- anybody -- petty grievances, and deep anger. Well, okay; he always had that.

But Franky can't escape his past. He is the rebellious son that still lives in his folk's basement so that his ego gets the thrill of telling them every evening at dinner, "I'm my own man!" He has made "I'm not my Dad" the basis of his career and of his whiny inner child.

Like Peter Pan, he won't grow up. But unlike Peter Pan, he's not carefree and happy. He's more of a Roddy McDowell, doomed to play the tortured, rebellious juvenile until, ironically, he dies of old age.

To give you a sample of what Franky Schaeffer has stooped to, check out his latest essay at the Huffington Blog. You won't see any inkling of the intellect of Francis Schaeffer in this piece, let alone the sense of balance, fairness and faith. You won't see sound exegesis of the Scriptures. You won't see an appreciation of how Christian values established Western civilization.

No, you'll only see a petulant kid who is spending his life fighting his father's ghost.

The essay is entitled, "Eradicate Fundamentalism In All Its Forms."

The next great task for the human race is to wean ourselves off literal interpretations of religion. We need to eradicate fundamentalism in all its forms.

Atheism is no help. Human beings are spiritual and look for meaning. Science holds answers but not "THE" answer we look for and long for. Family life and love -- continuity of relationships -- come closest for fulfilling our longing for purpose.

As I argue in my book Patience with God: Faith for People Who Don't Like Religion (or Atheism) the answer to fundamentalism, literal-minded religion and all the horror and absurdity they create is to work on the evolution of religion: reject false certainties rooted in myth and embrace myth as a window into the unknowable.

Clearly the issue for any sane Christian believer (or any believer in not just religion but any human construct, including science) is how to decide what parts of the moral teaching of the Bible (or Koran, or scientific theory) to edit or discard and what to live by.

Those of us who have no problem with celebrating the fact that some people are created gay, or that other people live with a girlfriend or boyfriend because marriage isn't always the best way to relate to a lover, have drawn an admittedly arbitrary circle of what is acceptable to them a bit wider than other believers have.

But the truth is no one (not even the dourest Reconstructionist Christian or Orthodox Jew) takes everything any religion teaches completely seriously, let alone practices it faithfully.

The truth is that interpreting religion is just that: interpreting. All that means is that common sense and compassion are the filters through which we look at religion, as we do with all of life. There is such a thing as freedom of conscience and the right to think!

In that sense everyone is a "liberal" and those who pretend they are consistent to their stated creeds are liars...

Admit it: the Bible is nuts in many places. Who follows this stuff? No one! So why stick it to people for choosing to not follow homophobic nonsense?...

The loyalty of those who wish to live as Christians (as opposed to those who wish to force others to be like them by using Christianity as a weapon), must shift from fidelity to the Bible (or any other text) to seeking the life-affirming message of transcendence buried within the madness, ignorance and fear that we discover not just in the darker portions of all "sacred" texts, but in every human heart.

Of course, what Franky Schaeffer needs to look hard into and then obey is the genuinely sacred Scriptures he has turned his wrath upon. He is a sad case, a demented soul who one could more likely pity were he not so hell bent (pun carefully intended) on spreading his heretical opinions to others.