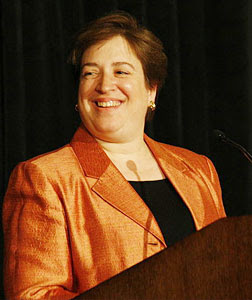 Elena Kagan would be a disaster on the Supreme Court.

For despite the sneaky moves of the Obama administration to hide her views from the public, more than enough evidence is available to show that Kagan would be a judge with an agenda...and with little respect for the U.S. Constitution. Indeed, we can expect her to use her power on the Court not as a proper jurist at all but as a social engineer, promoting her pet causes of abortion, gun control, homosexual privilege, and a remaking of America into a secularist, socialist state.

As a case in point of particular relevance to pro-life advocates, the leadership of National Right to Life has written a letter to members of the U.S. Senate outlining just how extreme are Elena Kagan's ideas about using the Court to further protect and promote abortion.

Among other matters, the letter shows how Kagan herself actively suppressed information about partial-birth abortion while a part of the Clinton administration's defense of that barbaric procedure. She knew the facts herself but went out of her way to keep the public from knowing just how many such abortions were performed, how monstrous they were, how truly unnecessary for "health reasons" they were, and so on.

Because of the radical nature of her own abortion advocacy, Kagan supported partial-birth abortion even when both the mother and child were entirely healthy.

But she didn't speak of that publicly. Nor would she let the facts speak for themselves. Instead, she provided distorted rhetoric and outright lies to help Bill Clinton and Democrats in Congress have some political cover on the extremely ugly issue.

Read through the NRL letter.

And then use this page to write your own, letting your Senators know just how strongly you feel about the nomination of Elena Kagan to the Supreme Court.
Posted by DH at 10:29 AM