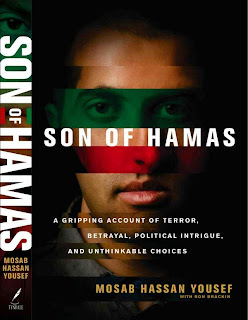 "What should be done with a man who infiltrated the terrorist group Hamas, spied for Israeli intelligence and broke up terror attacks, saving countless Israeli, as well as Palestinian, lives? Most people would say he should be honored. Not the U.S. government, it's trying to deport him."

There's others too that you'll find of help in understanding how on earth the Obama administration wants to grant amnesty to millions of illegal aliens and yet feels desperate to get a hero like Yousef out of the country.

Here, for instance, is a gripping article co-written by Yousef and Israeli Gonen ben Itzhak.

And this one written by actress and producer Noa Tishby shows up, of all places, at the Huffington Post.

Finally, check out this press release issued by the American Jewish Committee which concludes: "It is, of course, crucial that our immigration laws and the laws with respect to asylum be applied in a fashion consistent with the security of the United States. At the same time, there should be nuance and thoughtfulness in the application of those laws that takes into account special circumstances such as those in play in Mr. Yousef's case. We are concerned that the denial of Mr. Yousef's asylum request could, in addition to the harm that might come to him in his specific case, deter others from taking similarly brave and principled actions in the future."
Posted by DH at 11:46 AM