Basic Oil Spill "To Do" List: Why Won't Obama Act? 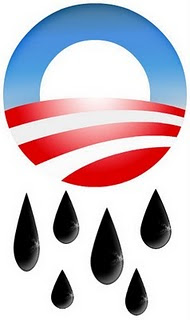 Rory Cooper has one of the must-reads of the day, one that outlines the 10 steps the Obama administration should do right now (71 days have already been wasted) to deal with the oil spill crisis. I print below an excerpt of the article but for the details behind each of the 10 items in the "to do" list you'll have to follow this link to the original piece in The Foundry of the Heritage Foundation.

Also, please use this list in your letters to your political representatives. We have got to get them moving on this!

The oil spill crisis in the Gulf of Mexico gets worse by the day. Oil spews from the broken well, further polluting our water and shores. The clean-up efforts drag on with bureaucratic interference, making matters worse. And what is the Obama administration doing? It continues to push for unrelated responses that will have a disastrous effect on our economy, especially the economy of the Gulf states most affected.

In fact, President Obama summoned a bipartisan group of senators to the White House on Tuesday to discuss his climate change legislation. When Tennessee Senator Lamar Alexander suggested that any such energy meeting should include a focus on the oil spill and BP, Obama responded: “that’s just your talking point” and refused to discuss the crisis.

Unfortunately, the American people are not hearing any of this. Day after day, blind allegiance to the president causes his supporters on the left to simply say the government is doing all that it can. The national media, prone to attention deficit disorder when a president they support is in the White House, have already moved on to a myriad of other subjects, offering only sporadic updates on the continuing crisis.

When the president answered questions following the G20 conference, not one reporter asked him about the situation in the Gulf. Not one question. When attention is paid, it is focused on BP, which is only half the story — the other half being government incompetence or an ideological rigidity that prevents commonsense solutions...

Without further delay, here are the first ten actions President Obama can take immediately to help solve the crisis in the Gulf.

10. Halt Climate Change Legislation
Posted by DH at 9:39 AM