Why Are These Particular Baby Dolls Inappropriate for Kids? 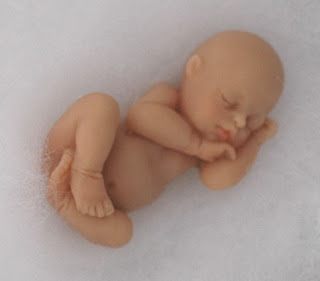 After reading this story from the Virginian-Pilot, it seems that all of Norfolk, Virginia is aghast and infuriated about what was done to the students of Oakwood Elementary School.

Were they shown videos of sexual activity or taught how to use condoms for "safe sex?" No, that wouldn't bother anyone except those fundamentalists who are so out of touch with the times. Could it be that books with homosexual themes were brought into the library? No, that too would be perfectly acceptable nowadays.

Maybe it was because a teacher made the kids sing a hymn of praise to Barack Obama? Golly, even that wouldn't provoke the kind of firestorm that occurred here.

So what was it? What did happen that, if the news reporter is to be trusted, set the town ablaze?

But to these Virginia school administrators and parents (who only discovered the "outrage" months after it had been happening, not a helpful note when you're trying to portray the thing as a great crisis), these scientifically sound fetal models were "incredible" and "entirely inappropriate and unacceptable."

Why? Because they could be viewed as a "pro-life tool."

Sexuality of a graphic, unnatural nature taught to elementary school children is one thing. But this -- allowing kids to see and feel realistic models of what human beings are like in their uterine state -- no, we can't have that.

Sure, its accurate. And yes, it's relevant too. And, okay, one would have to admit the models are age-appropriate. But, confound it, if the pro-lifers like them...if they know that models like this are effective in teaching the humanity of the unborn, then all of our liberal establishment's support of no-hassle, no-guilt abortion comes undone.

And we can't have that.

Read more on the situation from this excellent post over at Jill Stanek's blog.
Posted by DH at 12:47 PM