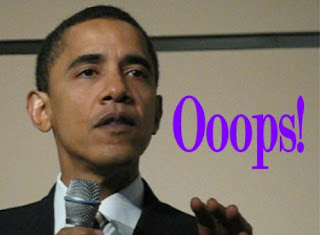 It's a question that would hardly have been asked in those days just after Barack Obama was elected President of the United States. After all, to those who had paid attention, he had run (and won) as a far left ideologue, a genuine socialist.

That hardly seems evidence of liberalism being out of favor.

But making sweeping promises and being able to deliver them are two distinct things. And it turned out that Obama couldn't deliver the goods. In fact, after the euphoria of electing a supposedly post-racial, post-partisan, transparent and highly skilled orator as its President, the country began to realize that it had done anything but.

For the new administration started slow and sluggish but demonstrated that it wasn't at all interested in conciliation or teamwork. Indeed, the most controversial and divisive zealots were put into positions of bureaucratic power. Government was carried on in secret. Deal-making, coercion, distortion of facts, blame, and demagoguery via teleprompter became Obama's rules of engagement.

The President, freed from having to curry favor from voters or the press, arrogantly turned on both.

As a candidate, Barack Obama played various roles but the fawning press refused to report his hypocrisy and inconsistency. They actually helped him in his various disguises. But when elected, the masquerade was over. He was Planned Parenthood's man after all. And he wasn't going to protect marriage. His religion wasn't Christianity but a mix of new age mysticism, Jeremiah Wright-style liberation theology, and deep respect for Islam. He didn't bother to go to church. American exceptionalism he sneeringly rejected -- he was President of the world. And so he hit the road on his apology tours, going out of his way to denigrate America, disrespect our allies and cravenly suck up to our enemies.

And when he was back home, the socialism he always held dear was also let out of its box: buyouts, bailouts, takeovers, spending like a drunken sailor, and ambitious schemes to shove whatever policies he wanted down the American gullet.

It was irresponsible to the max. The schemes just wouldn't work. There wasn't the money. It was a bizarre form of madness too -- so openly mad that the laws were written in secret, withheld from politicians who were expected to vote on them anyway. The bully pulpit was losing its power, so long-winded and uncertain and gaffe-prone was Obama without his teleprompter and so harebrained, sing-song and irritating was the man even when he had its help, that he opted instead to just be a bully. He scowled, threatened, pointed his nicotine-stained finger and got his way with timid Democrats -- after then giving them presents for seeing things his way.

But when the health care fight began to reveal these things in all their dishonor to the American people, something turned. The nastiness, the absurdity, and the tyranny which is "Obama liberalism" was rejected. Utterly rejected. His disapproval ratings reached record lows as did those of other Democrats and RINO incumbents. There were tea parties, editorial page revolutions, viral video clips -- even lifelong Democrats joined the chorus of boos.

But, most significantly, the opposition wasn't just about health care. It wasn't even about Barack Obama alone. No, the opposition to the administration's brand of liberalism was more about a resurgence of common sense -- in morality, economics, and national interest. Patriotism experienced a rebirth as did a strong desire to "throw the bums out" who had given us a government that, even before Obama, overtaxed us but left us under-represented, uninspired, unproductive and unprotected.

Socialism hadn't worked in Europe. But it was hanging on to the reins of power and still hoping to win back the unconverted and disillusioned. But then Barack Obama came and tried to outdo Europe in the socialism department. He wanted more than a bigger government, more even than a Nanny State under Democrat control. He wanted socialism on a grand scale including a new international order (as he told the West Point cadets just days ago) and the domination by government of private industry, private property and even such aspects of private life as religious conscience and expression.

And he is no incrementalist. He wants these things now. And he wants them bad -- so bad that even the devastating opposition now arrayed against him will not make him change his mind or his timetable.

If Obama fails (and it looks increasingly likely that he will), the cause of socialism even in Europe is in grave jeopardy. The stage on which his collapse has been enacted is too big. His aching ambition and pompous sense of destiny did what liberals had always feared -- he showed the public way too clearly what the goals and the spirit of liberalism really were. And therefore their rejection was dramatic and, quite possibly, permanent.

Is socialism dying? If so, it can blame no one more than its most fervent fancier, Barack Obama.
Posted by DH at 12:17 PM