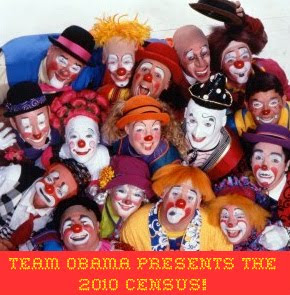 New York Post columnist John Crudele has pointed out the outrageous fraud of Team Obama listing in its "jobs created" category census workers who only worked an hour or two. In fact, it's worse than that. Many of these workers are released after a very short time (a few days, even a few hours) and then "re-hired" -- and each time they return they're listed as another new job created!

Each month Census gives Labor a figure on the number of workers it has hired. That figure goes into the closely followed monthly employment report Labor provides. For the past two months the hiring by Census has made up a good portion of the new jobs.

Labor doesn't check the Census hiring figure or whether the jobs are actually new or recycled. It considers a new job to have been created if someone is hired to work at least one hour a month.

One hour! A month! So, if a worker is terminated after only one hour and another is hired in her place, then a second new job can apparently be reported to Labor.

As an example Crudele cites this e-mail from a reader, "John: I am on my fourth rehire with the 2010 Census. I have been hired, trained for a week, given a few hours of work, then laid off. So my unemployed self now counts for four new jobs. I have been paid more to train all four times than I have been paid to actually produce results. These are my tax dollars and your tax dollars at work."

Here's another. "John: I worked for (Census) and I was paid $18.75 (an hour) just like Ms. Naomi Cohn from your article. I worked for about six weeks or so and I picked the hours I wanted to work. I was checking the work of others. While I was classifying addresses, another junior supervisor was checking my work. In short, we had a 'checkers checking checkers' quality control. I was eventually let go and was told all the work was finished when, in fact, other people were being trained for the same assignment(s)... I am totally convinced that the Census work could be very easily done by the US Postal Service."
Posted by DH at 9:24 AM