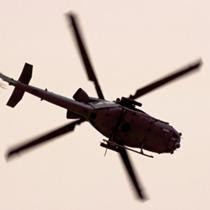 Though they don't make the headlines of the New York Times or the talking points of Katie Couric and her network colleagues on the evening broadcasts, those incursions by Mexican military into U.S. territory are still happening.

Does the strength and the dignity of America mean so little anymore? Is no one afraid of us? North Korea? Iran? Mexico? Somali pirates? And yet until there is a resurgence of will from our political leaders and a recovery of responsibility from the media, things are bound to get nothing but worse.

To refresh your memory, I embed at the conclusion of this post a startling MSNBC video clip from October of 2007. But lest you think the problem is just old news, read this report from WFMY News dated last week about a Mexican Navy helicopter flying over Zapata County, Texas. I print a few excerpts from that story immediately below:

Authorities have released photos from a second Mexican military helicopter incursion into Zapata County. The incursion was reported over the Four Seasons Mobile Home & RV Park and the Beacon Resort west of Zapata around 3:30 p.m. Sunday. Zapata County Sheriff Sigifredo Gonzalez said that the helicopter hovered in the area for about five to 10 minutes.

Sheriff Gonzalez said he's frustrated that state and federal officials have not done anything about the situation since the last helicopter incursion last month. The sheriff said he's worried local officials aren't being notified about joint operations with the Mexican military. Gonzalez said another possibility is that that Mexican military officials are being used to drop off drugs or illegal immigrants...

Sheriff Gonzalez was also quoted by the Houston Chronicle, “It's becoming more common now every day,” he said. “My problem is we find these things out through our media instead of our government. It goes to show how incompetent I guess our government is.”

Judicial Watch weighs in on the matter too (via Right Side News) -- Highlighting the U.S. government's perpetual failure to secure the southern border, a Mexican military helicopter was photographed by a Texas sheriff this week flying over a residential neighborhood at least a mile into the American side of the Rio Grande.

These sorts of invasions by Mexico's corrupt military, long on the drug cartel payroll, have been going on for years but the timing of this incursion is especially alarming since it occurred on the same week that Homeland Security officials revealed Mexican drug cartels are rapidly infiltrating federal law enforcement agencies along the southwest border.

This makes the repeated Mexican military incursions all the more abominable, especially since U.S. officials know they're occurring...

And then there's that damning MSNBC clip with Sarah Carter whose astounding revelations, by the way, have yet to be properly dealt with: