New Anti-Israel Film Coming Soon to a Church Near You 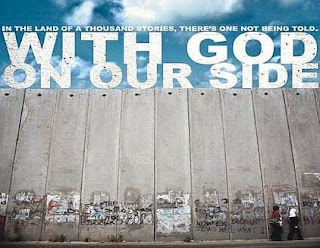 If you are already angered and worried about the stridently anti-Israel attitude of Team Obama, just wait until you read this Front Page article by Mark Tooley. It examines a new movie specifically designed to peel away support for Israel by American evangelicals.

Using the standard tools of leftist propaganda (unfounded guilt trips, selective reporting, omission of any facts which might get in the way of the ideology), this movie also employs something that proved effective in swaying many young evangelicals to vote for Barack Obama; namely, the peddling of a distorted view of compassion -- one which is long on feelings but oh-so-short on justice, righteousness, reason, historical accuracy and responsibility.

Not surprisingly, the film is praised by the same cadre of pseudo-evangelicals that have exchanged "that old time religion" for a hipper, more Hollywood-friendly spirituality. These folks can't be bothered by such old-fashioned trivialities as the authority of the Bible or the singularity of the gospel, let alone those tiresome insistencies on the sanctity of life, separation from the world, family life, work ethic, that old "male and female He created them" stuff...or the support of Israel.

It's liberation theology microwaved and served at the church supper -- guests of honor being Jimmy Carter, Bill Clinton and now Barack Obama.

Anyhow, here's Tooley's fine expose of the new pro-Palestinian, pro-Obama and very anti-Israel film, “With God on Our Side.” Sadly, it may be coming to a church near you soon.
Posted by DH at 10:05 AM