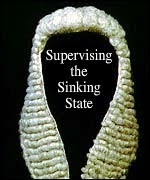 Roll Britannia -- but in this direction?

* Harriet Harman, a radical feminist who is a Labour Party MP and the leader of the House of Commons, has joined Chris Bryant, an openly homosexual Labour Party MP, stumped for votes among the gay community of Soho a few days ago, promising that a Labour government would implement compulsory sex education, ditch the "free speech" amendment currently encased in hate crime laws and work aggressively against the resident "homophobia" in British society.

"Ms. Harman accused Chris Grayling, shadow home secretary, of homophobia for suggesting that consciences of Christian bed-and-breakfast owners should be respected when they have to deal with homosexual couples wishing to stay at their properties."

* "Two homosexual activists posed proudly in front of cameras as the first same-sex parents in Britain to jointly sign a birth certificate. Natalie Woods, 38, gave birth to Lily May Betty Woods in Brighton earlier this month through the use of sperm given by a registered donor. Her lesbian partner, Elizabeth Knowles, 47, is named on the certificate instead of the biological father.

The couple were able to take advantage of the Human Fertilisation and Embryology Act 2008 which came into effect at the beginning of this month. The Act entitles people in same-sex relationships to both be treated as equal parents of a child. Until the law changed, homosexual couples could not put both of their names on a child conceived by a donor.

Neither of the women are described as ‘mother’ on the certificate as the words ‘mother and father’ have been scrapped from some birth certificates—the practice for the past 170 years—and the lesbians are listed as Lily May's ‘parents’ instead."

* "Conservative Shadow Home Secretary Chris Grayling is now saying that bed-and-breakfast Christian owners should not be allowed to act according to their conscience when they have to deal with homosexual guests sharing bed in their properties and that he supports homosexual adoption.

Earlier this month, Mr Grayling had faced calls for his demotion after saying he believed that consciences of Christian bed-and-breakfast owners should be respected when they have to deal with homosexual couples wishing to stay at their properties...

However, following the Mr Grayling’s saga, David Cameron wrote on Pink News, a homosexual on-line newspaper, that he supported homosexual ‘rights’ and promised to erase the criminal records of those who were convicted of homosexual sex acts, which were illegal in the past.

Mr Grayling has now changed his stance. In an interview with Channel 4, he said that he had voted in favour of civil partnerships, and that he had changed his view and now supports homosexual adoption of children."

* "Lord Carey, the former Archbishop of Canterbury (1991 – 2002) and other church leaders will urge the Master of the Rolls and other senior judges to stand down from future Court of Appeal hearings involving cases of religious discrimination because of the judges’ perceived bias against Christianity.

Senior churchmen do not think Christians have any chance of a fair ruling if the latest significant hearing is heard in front of those judges who, they argue, have already shown a lack of understanding of Christian beliefs.

Critics are particularly alarmed by a ruling by Lord Neuberger, the Master of the Rolls, on behalf of the Court of Appeal, that Lillian Ladele, a registrar who refused to conduct civil partnerships ceremonies – because they were against her Christian beliefs – broke the law.

The Court of Appeal decided in December that the right to express a strong Christian faith must take second place to the rights of homosexuals under Labour's equality laws, the Daily Telegraph reported."
Posted by DH at 11:52 AM