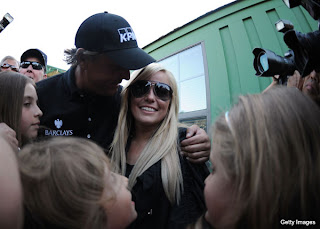 Claire and I have been fans of Phil Mickelson for many years and so his victory in the Master's last weekend was a particular delight to us. But the way he won, the context of his wife and mother battling breast cancer, his poor showing in all the other tournaments he's played in this year, and the striking contrast he made to a petulant, self-centered Tiger Woods made this victory a delight to the whole world.

Even if you're not into golf...even if you don't normally read sportswriters at all, I think you may find these articles not only interesting, but inspiring:

* "Phil Mickelson, Wife Amy Give Us One of Augusta's Best Moments" (This, by the way, comes from Jay Busbee, a curmudgeon who is anything but a fan of Phil Mickelson.);

* "Mickelson's Win a Victory for Women" by ESPN's Rick Reilly (You'll also enjoy this video clip that Reilly made the day before the tournament ended which deftly contrasts Mickelson and Woods.);

* "Mickelson's Guts, Talent Came Together for Shot That Defined This Masters" by Joe Posnansky of Sports Illustrated;

* "Lefty’s Masters Win Unlike Any Other" by Dan Wetzel;

* And finally, a quick note about yet another reason a whole lot of golfers were ecstatic over Mickelson's Masters win -- "Phil Mickelson's Win Means $1 Million Refunded by Golfsmith"
Posted by DH at 7:34 AM