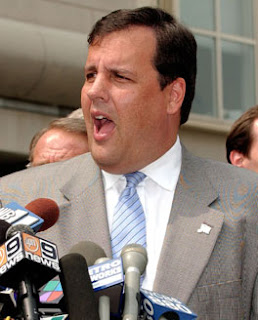 ...There are 700,000 more Democrats than Republicans in New Jersey, but in November Christie flattened the Democratic incumbent, Jon Corzine. Christie is built like a burly baseball catcher, and since his inauguration just 13 weeks ago, he has earned the name of the local minor-league team -- the Trenton Thunder.

He inherited a $2.2 billion deficit, and next year's projected deficit of $10.7 billion is, relative to the state's $29.3 billion budget, the nation's worst. Democrats, with the verbal tic -- "Tax the rich!" -- that passes for progressive thinking, demanded that he reinstate the "millionaire's tax," which hit "millionaires" earning $400,000 until it expired Dec. 31. Instead, Christie noted that between 2004 and 2008 there was a net outflow of $70 billion in wealth as "the rich," including small businesses, fled. And he said previous administrations had "raised taxes 115 times in the last eight years alone."...

Christie is using his power to remind New Jersey that wealth goes where it is welcome and stays where it is well-treated. Prosperous states are practicing, at the expense of slow learners like New Jersey, "entrepreneurial federalism" -- competing to have the most enticing business climate.

But this fight ain't gonna' be easy. The Democrats, union reps and overpaid public employees are coming at Christie with everything they've got. Read the whole George Will column at the Washington Post here.