Send in the Clowns? Don't Bother, They're Here. 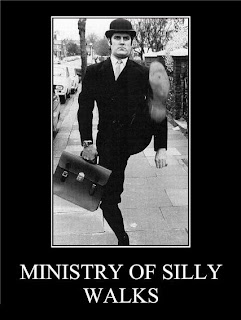 If the Nanny State stands for nothing else, it stands for 1) favoritism for the few (in stark contrast to genuine democracy); 2) spending priorities which reflect that favoritism (thus creating a tremendously inefficient use of funds) and 3) a coercive tax policy which forces the majority to fund a never-ending series of things that do not serve their needs or wishes.

In keeping with the lively spirit of the government takeover of health care, I thus give you another particularly laughable boondoggle from Team Obama; namely, a restructuring of U.S. Department of Transportation funds and designs which will give bicyclists, roller blade skaters and, I suppose, bureaucrats from Monty Python's Ministry of Silly Walks equal consideration to that formerly given to drivers of vehicles.

Then read the following tidbit from Fox Nation. It will, pun fully intended, drive you nuts.

LaHood signed the new policy directive on March 11, the same day he attended a congressional reception for the National Bike Summit, a convention sponsored by a bicycling advocacy group, the League of American Bicyclists. LaHood publicly announced his agency’s new direction four days later in a posting on his blog -- “Fast Lane: The Official Blog of the U.S. Secretary of Transportation” -- where he effusively described it as a “sea change” for the United States.

“Today, I want to announce a sea change,” LaHood wrote. “People across America who value bicycling should have a voice when it comes to transportation planning. This is the end of favoring motorized transportation at the expense of non-motorized.”

For crying out loud.

Satirical comedy sketches like that old Monty Python Silly Walks routine elicit not only laughter nowadays but a nostalgic yearning -- yearning for the days when slapstick absurdity was the business of clowns and not political tyrants operating out of Washington and Brussels.
Posted by DH at 5:21 PM