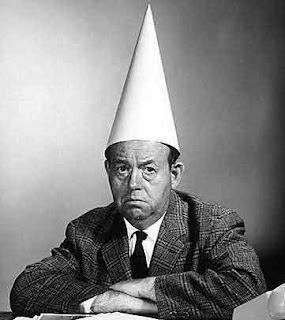 It turns out that Davenport, Iowa isn't going to change Good Friday to "Spring Holiday" after all.

An oafish bureaucrat (City Administrator Craig Malin) sent round a memo to city employees declaring the change. But Mr. Malin is not only an ignoramus who doesn't know the social graces, U.S. history, or the Constitution, he doesn't even know the limits of his job.

"My phone has been ringing off the hook since Saturday," said city council alderman Bill Edmond. "People are genuinely upset because this is nothing but political correctness run amok."

Edmond said the city administrator made the change unilaterally and did not bring it to the council for a vote, a requirement for a change in policy.

"The city council didn't know anything about the change. We were blind sided and now we've got to clean this mess up. How do you tell people the city renamed a 2,000 year old holiday?" said Edmond.

It didn't take long for the city to resurrect the name Good Friday. Malin was overruled today and the words "Spring Holiday" disappeared.

It should be pointed out, however, that Malin isn't the only doofus in this arrogant power play. Davenport Civil Rights Commission chairman Tim Hart showed an equally inept understanding of government when he urged Malin to make the change. "Our Constitution calls for separation of church and state. Davenport touts itself as a diverse city and given all the different types of religious and ethnic backgrounds we represent, we suggested the change."

One might suppose that a basic requirement for a city official is to have actually read the Constitution. But apparently not in Davenport, Iowa.

Even ABC News (which filed this report) couldn't help but needle Hart a bit for his pompous ignorance.

Hart said the commission had no plans to change the name of Easter Sunday, because it fell on a weekend and government offices were already closed. The commission, he said, discussed changing Christmas, but decided enough other religions celebrate Christmas too. Hart, however, could not name one.

Obviously, the change that's needed in Davenport, Iowa has nothing to do with removing established holidays from the calendar but removing intolerant bureaucrats from city government.
Posted by DH at 9:46 AM