Gao Zhisheng Is Alive...But Not Free 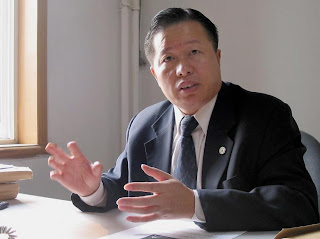 He's been missing for over a year. But last Sunday, perhaps because they'd felt pressure from the international community, the Communist Chinese finally allowed human rights lawyer Gao Zhisheng (who remains in secret custody) to speak briefly to his wife and children.

But though Gao Zhisheng is confirmed to be alive, the questions about his illegal arrest and imprisonment, possible torture and, most important, his future remain.

Back in March of 2009 I urged you to sign a petition created by ChinaAid which pleaded the cause of Gao Zhisheng. Thanks to the organization's efforts more than 130,000 have signed that petition to date, including many prominent political figures from around the globe.

No, Barack Obama, Joe Biden, Hillary Clinton, Harry Reid, and Nancy Pelosi are NOT among those signatories. But YOU can be.

And you can help not only Gao Zhisheng and his family but the cause of human rights and freedom in Communist China.

My suggestions? 1) Watch the 7-minute video clip I post below. It is difficult to watch, I know. But it is important. It will expand our understanding and fuel our motivation to intercede in behalf of the innocent victims of Communist barbarism. 2) Say a few prayers. 3) Sign the aforementioned petition. 4) Use the same page to find out about sending appeals to U.S. Congressmen, U.N. Secretary-General Ban Ki-Moon, and Chinese officials themselves. And 5) Please consider forwarding this post to others. We need many, many more to become aware of and respond to this brutal injustice. They deserve our best efforts.