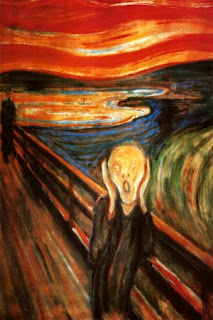 I'm not at all hep to modern music. Nevertheless, I found very provocative Rachel Thorpe's essay at Christian Heritage, “I’m Being Taken Over”: Popular Music and the Fear of the Impersonal. It is a short piece which explores one of modern music's philosophical preoccupations; namely, an existential fear that leads to "emotional numbness and the loss of a moral code." Taking Lily Allen's 2009 hit song, "The Fear," as a backdrop, Thorpe details several aspects of this brooding, cynical fear so prevalent among modern youth and then contrasts it with the advice of Francis Schaeffer.

If you're interested in this sort of thing, watch the video of "The Fear." (Think "Material Girl" but with a darker, more nihilistic bite. And be careful of at least one "expletive not deleted.")

And then, as both an explanation and corrective, read through Rachel Thorpe's brief essay.
Posted by DH at 10:34 AM