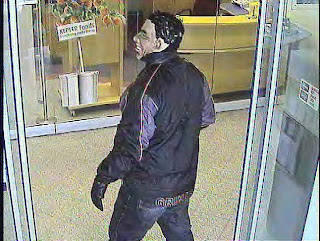 Maybe this brainless bank robber should have chosen a different mask. After all, Barack Obama just isn't getting the respect he was a year ago.

But then again, if you try to rob a bank that is closed, your taste in disguises isn't your primary problem.

Here's the story in the Daily Mail of a half-wit hoodlum who grabbed a gun, donned an Obama mask and put into operation his plan to rob the Raiffeisen Bank in Kircheim, Austria. But, doggone it all, the bank had closed early for a staff training session. Thus unable to just stroll inside, the angry felon beat on the glass doors, waved his gun and demanded of the employees inside to be let in. The amused employees didn't comply.

'We thought it was part of the training, some sort of initiative test, or a joke. Laughing only seemed to make him more angry,' said one worker.

Of course, it's just as well that the "Obama robber" didn't get the loot. For ill-gotten gains (whether obtained by direct larceny or by overbearing and unjust taxation) always prove to be an ineffective economic stimulus, leading to wasteful spending, moral corruption and public scorn.

Are you listening, Mr. President?
Posted by DH at 9:46 AM