What a Week for the President! 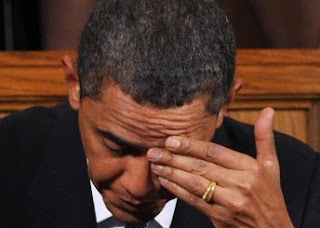 What a week it's been for Barack Obama. For instead of helping him crow over the first-year anniversary of his presidency, reporters are grudgingly bound to cover the many evidences of how failed have been his policies and ideas.

* Another sad jump in first-time claims for unemployment aid shows how ineffective has been the President's wildly expensive "stimulus" package.

* The fallout contnues from the "underwear bomber" and his exposure of how frail the security sytems are at our nation's airports.

* An unknown Republican wins the Massachusetts Senate seat that has, except for a very brief period, been in Democrat control since the 1920s.

* U.S. prestige and power are both in rapid decline as Iran, South Korea, China, Russia, Islamic terrorists and others openly ridicule and exploit their once-formidable foe.

* Democrats in Washington, D.C. still live high on the taxpayers' hog and, without bothering to cut any spending, demand the debt ceiling be raised to $1.9 trillion.

* Obama's poll numbers are still tanking. He has fallen further in the opinion polls than any other political figure since we’ve been using polls.