Has Chavez Finally Gone Too Far? 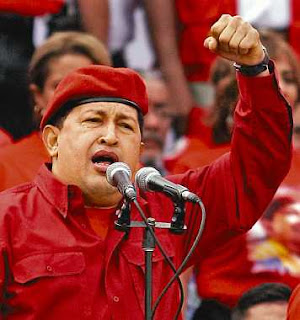 Venezuelan tyrant Hugo Chavez just shut down Radio Caracas Television and 5 other cable TV channels because they wouldn't serve as mere megaphones for the dictator's failing agenda. Indeed, these stations had such anti-socialist gall that they refused to broadcast every ranting speech Chavez made.

But RCTV was the worst offender. The staff there went so far as to actually oppose certain of Chavez' policies in on-air editorials. The strongman had been threatening to pull their plug for some time unless they got in line. They didn't. And so, as of January 24, RCTV and the others have been driven into stone cold silence.

I wonder if Nancy Pelosi and Al Franken are taking notes.

However, it turned out that shutting down RCTV just added to the dictator's many woes. As an immediate result, major protests have erupted in Caracas and other Venezuelan cities. Chanting crowds confronted by police, street demonstrations met with tear gas cannisters, fights between pro-Chavez and pro-democracy groups, a student killed and several officers injured in the city of Merida, a couple of the Chavez inner circle resigning -- Chavez may indeed be reaching the end of his countrymen's endurance.

But how can anyone be surprised? For not only has Venezuela been forced to swallow Chavez' swelling egoism, his attraction to unjust regimes the world over, and his ever-increasing war on individual liberties, the once prosperous and noble nation is a mess.

As Ray Walser points out in this entry at The Foundry (the blog of the Heritage Foundation):

Increasing polarization is the result of mounting problems occasioned by Chavez’s disastrous “Socialism of the 21st Century” that include galloping inflation, recurring power outages, and periodic food shortages.

Chavez has resorted to increasingly restrictive measures ranging from currency devaluation to the nationalization of retail stores to shore up his struggling oil-based economy. He has driven his nation’s economy to the bottom of the barrel.

So here's to the voices of freedom in Venezuela. May their long nightmare soon be over. And, in particular, I lift a prayer for station RCTV. May it soon be back on the air, celebrating a re-birth of liberty, prosperity and democracy in Venezuela.
Posted by DH at 10:11 AM