Danish Newspaper: "Obama Is, Of Course, Greater Than Jesus." 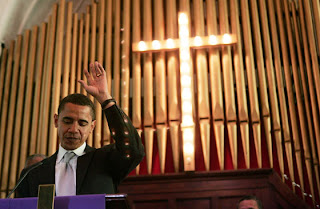 And just when you thought the cult of Obama couldn't get more absurd, here comes an editorial from Denmark's second-leading newspaper, Politiken. And, no; it isn't satire.

He is provocative in insisting on an outstretched hand, where others only see animosity.

His tangible results in the short time that he has been active – are few and far between. His greatest results have been created with words and speeches – words that remain in the consciousness of their audience and have long-term effects.

He comes from humble beginnings and defends the weak and vulnerable, because he can identify himself with their conditions.

And no we are not thinking of Jesus Christ, whose birthday has just been celebrated - - but rather the President of the United States Barack Hussein Obama...

If such a comparison were to be made, it would, of course, inevitably be to Obama’s advantage.

Today, his historic Health Reform is being passed through the American Senate – a welfare policy breakthrough that several of his predecessors have been unable to manage.

Despite all the compromises, it has finally been possible to ensure something so fundamental, as the right of every American not to be financially shipwrecked when their health fails them. Add to that the biggest ever financial support package in America’s history, a major disarmament agreement and the quickest-ever re-establishment of American reputation.

On the other hand, we have Jesus’ miracles that everyone still remembers, but which only benefitted a few. At the same time, we have the wonderful parables about his life and deeds that we know from the New Testament, but which have been interpreted so differently over the past 2000 years that it is impossible to give an unequivocal result of his work.

Obama is, of course, greater than Jesus – if we have to play that absurd Christmas game. But it is probably more meaningful to insist that with today’s domestic triumph, that he has already assured himself a place in the history books – a space he has good chances of expanding considerably in coming years.

Without, however, ever attaining the heavens...
Posted by DH at 9:45 AM