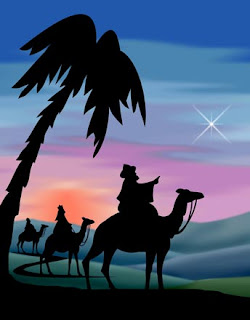 Again, from the pages of our "Making the Most of Christmas" packet, here's the second Christmas quiz. (Others will be posted in the next few days and over here is the first.)

2) The boar's head was a favorite dish in the traditional English Christmas feast. According to legend, the choice of this dish dates back to the Middle Ages when a particularly rowdy boar was killed by: A) St. Nicholas B) St. George C) King Wenceslas D) Choking to death on a book of Greek philosophy

4) What plant is called the "Flower of the Holy Night" in Mexico? A) Winter's Rose B) Navidad de Valencia C) Poinsettia D) Picolino

5) Most countries commemorate the visit of the Magi on what day? A) December 8 B) December 14 C) December 25 D) January 6

6) What traditional Christmas dish has a name that means "to swell or raise"? A) Egg nog B) Plum pudding C) Divinity D) Marzipan

7) On Christmas Eve in 1944, a terrible tragedy occurred but accurate news of the event was unavailable for a long time afterwards. What was it? A) The sinking of the S.S. Leopoldville B) The assassination of Archduke Ferdinand of Austria C) The Boxer Rebellion in China D) Amelia Earhart's airplane crashed in the South Pacific

8) The famous defense of Santa Claus' existence written by the New York Sun in 1897 was written in response to a letter written by a little girl named: A) Belinda B) Mary C) Brooke D) Virginia

10) When Santa is in Finland, he chooses a different form of transportation than the sleigh he uses in the USA. What is it? A) A magic carpet B) A horse C) A goat named Ukko D) A white elk named Grizel

11) The details we have about the Advent of Jesus come from what New Testament books? A) All four gospels B) Matthew & Luke C) The gospel of John D) The epistles of Peter

12) In both Idaho and Indiana there is a town named: A) Christmas City B) Yuletide C) Tiny Tim D) Santa Claus

13) The day after Christmas, December 26, is known as Boxing Day in England and elsewhere. It is also the holy day associated with what saint? A) St. Stephen B) St. Nicholas C) St. Boniface D) St. Jerome

Answers: 1) B -- American inventor, Ralph E. Morris is credited with the first use of electric Christmas lights. His purpose was to find something safer than candles which started more house fires than one could count. 2) D -- Yes, the story suggests a student saved himself from a charging boar by throwing a book of Aristotle's writings at it. The boar greedily gulped down the book, choked itself, and thus became a meal for the student and his colleagues. 3) B 4) C -- The Poinsettia is named after an American ambassador to Mexico who "discovered" the pretty flower in the 1820's. 5) D (January 6 is Epiphany) 6) B – There are no plums in traditional plum pudding! 7) A 8) D 9) B 10) C – Ukko is supposedly made of straw. 11) B 12) D 13) A 14) A 15) C
Posted by DH at 11:03 AM