Are You Bothered by the Bizarre Blasphemy on TV? 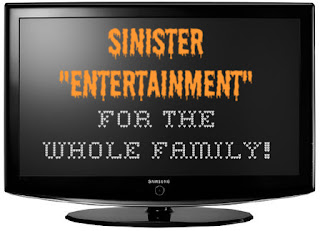 Flipping over during commercials from the Eagles/Bears game on Sunday night, I caught a few examples of what passes for modern entertainment during ABC's American Music Awards.

I didn't see Adam Lambert's number (the excerpts from other performances I did see were quite shocking enough, thank you) but it seems that the graphic and perverse sexual antics performed on network TV by such sleaze champions as Madonna and Britney Spears are now being trumped by even more bizarre and blasphemous decadence.

Lambert's song and dance, for instance, "featured male dancers on leashes, an open-mouth kiss between Lambert and his male keyboardist, and simulated oral sex, both male-on-male and female-on-male."

And this on prime time Sunday night television.

Ed Sullivan, where did you go?

Of course, Lambert's performance was controversial and shocking. But that's exactly why it is being praised by Rolling Stone, MTV and other "progressives." Entertainment Weekly's Ken Tucker wrote, "As a TV viewer, I thought Lambert's performance was a gas, a delight, a blast of brash vulgarity in the midst of ordinary vulgarity. The song he was singing was beside the point. The point was, ‘Here I am, Adam Lambert, freed from the shackles of American Idol, I'll push this dancer's face into my crotch if I feel like it, isn't it funny to lead human beings around on leashes, and can you believe how high I got my hair to stand up under these lights?'"

Certainly I am skeptical how my protests will be received by ABC and Dick Clark Productions but that is really beside the point. My conscience will not allow me to just shrug my shoulders and get used to it. Nor is it sufficient to just complain to friends about such travesties as we pine together for the good old days.

We must pray for the people involved (including the millions of teenagers and young adults who are getting their moral bearings from such shows) and we must keep shining our lights by speaking out against wickedness.

I was truly saddened to learn about the depths of decadence to which the performers on your American Music Awards stooped. Graphic homoerotic performances, songs reveling in rape and murder, several numbers where titillation trumped talent -- these things lead young people into experiences that are dangerous to body and soul. And thus they prostitute the tradition of Dick Clark Productions and ABC.

You should be very ashamed of that show.

(I had a few more things to say but the contact form at ABC cuts you off at 5oo characters.) That contact form, by the way, can be found right here. As for Dick Clark, his website doesn't allow for feedback but you can send along a letter to Dick Clark Productions, 3003 West Olive Avenue, Burbank, CA 91505.

And one more item in this vein -- if you have been frustrated by the new Reebok TV ads that feature lingering, close-up shots of a woman's "pantied posterior" and breasts in a push-up bra (just the kind of thing you're delighted to have your kids see on television, right?), then please follow up with a letter of complaint to that ignoble company.

Your new TV spots featuring titillating close-ups of a woman's breasts and posterior are in remarkably poor taste. I'm sure that these sexist, sophomoric spots are discouraging many from buying your products. They certainly have had that effect in this household that has formerly purchased Reebok products. But not anymore. A company that makes such a brazenly bad decision in its advertising policy is probably making bad decisions elsewhere. So, we're off Reebok.

(They only allow 500 characters as well.)

So what do you say? Write a couple of letters today. It's just not satisfactory to whine...when we can shine instead.