These Didn't Make the Cut for "Best Criminal Disguises" 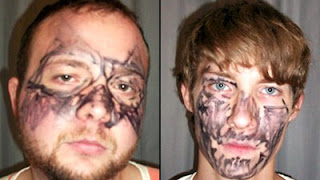 The fellows shown here are not presenting the cheapest in Halloween wear -- these are the "disguises" they came up with before breaking into an apartment in Carroll, Iowa. They were caught soon after leaving the scene of the crime after driving down the main street of this small town -- with the black ink still all over their faces.

The men were reported by a witness as wearing what appeared to be holsters so they were arrested at gunpoint. But it turns out that neither man was armed. Except, one assumes, for a couple of heavy duty Magic Markers.

The system went easy on the fellows, charging them with only second-degree attempted burglary. In addition, the driver of the getaway car (undecorated) was also charged with DUI. Nevertheless, the bond for each was a measley $7,500 (surety accepted) and so both dudes are out on the street.

Just in time for trick and treating.
Posted by DH at 11:12 AM