CNN Is Sinking: Time to Throw 'Em a Brick 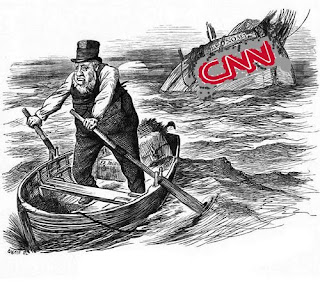 The New York Times suggests that "The results demonstrate once more the apparent preference of viewers for opinion-oriented shows from the news networks in prime time."

No, that can't be it. Because CNN's "news shows" are, in fact, opinion shows themselves. They just don't admit it like Sean Hannity or Bill O'Reilly do.

At any rate, I find these latest ratings a cause for mild rejoicing because CNN's leftist, irreligious bias has dominated the cable airwaves for 20 years. And, for that matter, it's dominated other spheres as well -- like doctor's offices, coffee shops and restaurants, even airport boarding areas.

And despite their ratings woes, CNN still commands a tremendous amount of those venues. Old habits die hard. Thus, the office managers who routinely turn the TVs on need to be encouraged to change their ways. It's the best way to get CNN out of our hair.

So here's my suggestion. I say let's respond to CNN's sinking in a positive, pro-active way; namely, by tossing them a brick.

We do that by suggesting to the nurse in charge of our doctor's office OR the lad who's steaming our latte at the coffee shop OR the gal behind the counter ar our local "gas and go" (where CNN is playing out on the pumps) that they change stations. "Do you know," we might begin, "that CNN is rapidly becoming the least popular cable news network? It's true. I read it in the Times. Even CNBC is beating them in the ratings. But the news network on top, and by a long ways too, is Fox News. I think you'd find yourself pleasing more of your customers (me among them) if you'd turn off CNN. It's so biased and unprofessional and yet so doggone arrogant too. So, for my two cents worth, I'd sure prefer Fox over CNN.

Or better yet, turn the stupid TV off altogether. You don't think we can't be without a talking head at least a few minutes in our day?"

And other venues? Well, way back in September of '06, I posted a brief article ("Air Travelers: CNN's Captive Audience") in which I shared ways in which you could effectively protest being forced to watch CNN when you were stuck in an airport. That post still applies.

And, on the off chance that you might be thinking that CNN isn't all that liberal, let me link you to just a few Vital Signs posts that will serve to clarify the matter: Clueless, Classless CNN (January 2, 2009); CNN Apologizes to China (April 16, 2008); and Is "God's Warriors" Enough to Create a CNN Backlash? (August 29, 2007)