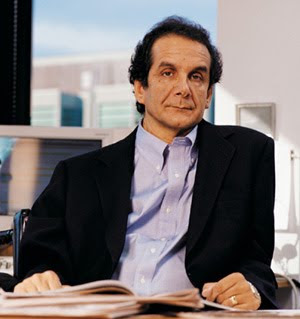 DER SPIEGEL invited Charles Krauthammer in for an interview and despite biased questions, Krauthammer delivered one of the most thoughtful, undaunted and well presented analyses of the Obama administration (as well as other things) you're going to find.

I urge you to read it in its entirety. But, since I know some of you are so on the run and won't do that, I'll print a few excerpts.

SPIEGEL: Mr. Krauthammer, did the Nobel Commitee in Oslo honor or doom the Obama presidency by awarding him the Peace Prize?

Charles Krauthammer: It is so comical. Absurd. Any prize that goes to Kellogg and Briand, Le Duc Tho and Arafat, and Rigoberta Menchú, and ends up with Obama, tells you all you need to know. For Obama it's not very good because it reaffirms the stereotypes about him as the empty celebrity.

SPIEGEL: Why does it?

Krauthammer: He is a man of perpetual promise. There used to be a cruel joke that said Brazil is the country of the future, and always will be; Obama is the Brazil of today's politicians. He has obviously achieved nothing. And in the American context, to be the hero of five Norwegian leftists, is not exactly politically positive...

SPIEGEL: Should he have turned down the prize?

Krauthammer: He would never turn that down. The presidency is all about him. Just think about the speech he gave in Berlin. There is something so preposterous about a presidential candidate speaking in Berlin. And it was replete with all these universalist clichés, which is basically what he's been giving us for nine months.

SPIEGEL: Why do Europeans react so positively to him?

Krauthammer: Because Europe, for very understandable reasons, has been chaffing for 60 years under the protection, but also the subtle or not so subtle domination of America. Europeans like to see the big guy cut down to size, it's a natural reaction. You know, Europe ran the world for 400 or 500 years until the civilizational suicide of the two World Wars. And then America emerged as the world hegemon, with no competition and unchallenged. The irony is America is the only hegemonic power that never sought hegemony, unlike, for example, Napoleonic France. Americans are not intrinsically imperial, but we ended up dominant by default: Europe disappeared after the Second World War, the Soviet Union disappeared in 1991, so here we are. Of course Europeans like to see the hegemon diminished, and Obama is the perfect man to do that.

SPIEGEL: Maybe Europeans want to just see a different America, one they can admire again.

Krauthammer: Admire? Look at Obama's speech at the UN General Assembly: "No one nation can or should try to dominate another nation." Take the first half of that sentence: No nation can dominate another. There is no eight year old who would say that -- it's so absurd. And the second half? That is adolescent utopianism. Obama talks in platitudes, but offers a vision to the world of America diminished or constrained, and willing to share leadership in a way that no other presidency and no other great power would. Could you imagine if the Russians were hegemonic, or the Chinese, or the Germans -- that they would speak like this?...

SPIEGEL: You have called him a "young Hamlet" over his hesitation about making a decision on Afghanistan. However, he's just carefully considering the options after Bush shot so often from the hip.

Krauthammer: No. The strategy he's revising is not the Bush strategy, it's the Obama strategy. On March 27, he stood there with a background of flags, Secretary of State Hillary Clinton on one side and Secretary of Defense Robert Gates on the other, and said: "Today, I'm announcing a comprehensive, new strategy for Afghanistan and Pakistan." So don't tell me this is revising eight years of Bush, he's not. For all these weeks and months he's been revising his own strategy, and that's okay, you're allowed to do that. But if you're president and you're commander-in-chief, and your guys are getting shot and killed in the field, and you think "maybe the strategy I myself announced with great fanfare six months ago needs to be revised," do it in quiet. Don't show the world that you're utterly at sea and have no idea what to do! Your European allies already are skittish and reluctant, and wondering whether they ought to go ahead. It's your own strategy, if it's not working, then you revise it and fix it. You just don't demoralize your allies...
Posted by DH at 11:10 AM