About That $95 Homeless Doll 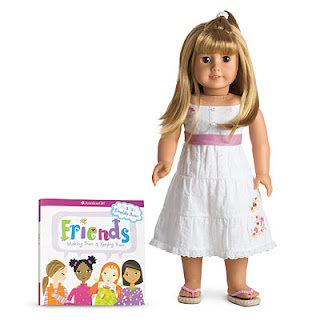 Yes, it's a weird (as well as sad) sign of the times when a major toy company markets a doll representing a little girl who is homeless because her deadbeat dad abandoned her. Also, she's been a victim of severe bullying too.

And no, I'm not kidding. The toy company is Mattel and the doll is Gwen, sold with this sordid story as a basic element of her identity.

The doll is part of the extremely popular American Girl series and so it has made quite a stir. Is it a political statement? Does it foster negative ideas about men? Does it unnecessarily connect a young girl's playtime with traumatic experiences; i.e. This is so sad. Could this one day be me?

And what about that price? Cruelly ironic? Especially when none of the profits go to combat homelessness as one might have thought.

Oh, one more thing. Gwen's story includes another doll who comes alongside her and befriends and protects her. Her name is Chrissa. And the Chrissa "Starter Kit" (complete with her books, outfits, and baby llama) is another $178.

Mattel has been criticized in several quarters for a couple of weeks now for all of the above. But most of the concern is aimed at Mattel's wickedly high prices and the company's heartlessness in exploiting the tragedy of homelessness. So it seems rather convenient that a new story line has just slipped out that Mattel has joined with the Ophelia Project, a nonprofit group dedicated to helping young people handle bullying.

Also in the company's defense, as reported by Kristen Jordan Shamus in the Detroit Free Press, American Girl has donated nearly $9 million worth of clothing and books to Kids in Distressed Situations in the past 19 years. KDS is a global charity which gives help to homeless kids, kids whose parents are in prison, kids who have experienced natural disasters, etc.

Concludes Shamus, "Suddenly, I don't feel so bad about my daughter having one of these dolls."

I understand her point. And I'm pleased that Mattel gives a small portion of its immense profits to charity.

But I reach a much different conclusion, based on my belief that a young child's play time shouldn't be tarnished by trauma or political indoctrination AND based on my belief that $95 for a single doll is extravagantly overpriced -- and that doesn't include all the accessories nor the built-in expectation that other dolls in the series will be purchased.

No, my conclusion is that we should teach our children how to play for fun alone...and to play in such a way that there's a few dollars left over for food, college, and perhaps to donate to little girls (real ones) who face needs.
Posted by DH at 8:59 AM