Yipes! Obama Has a Friend In Castro and a Father in Qadhafi. 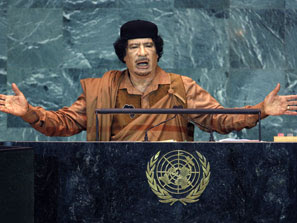 This can't be good for America.

First, Barack Obama's praises are sung by the murdering dictator, Fidel Castro. And then the next fellow to throw accolades our President's way is another thug of the same ilk, Libya's Muammar Qadhafi.

During an almost unendurable speech at the U.N. yesterday (following Obama's weak performance at the same podium -- see the following post), Qadhafi compared the U.N. Security Council to Al Qaeda terrorists, suggested that either an American pharmaceutical company (or the military) purposely created the swine flu virus, and called for U.N. investigations into all kinds of assassinations, including that of John F. Kennedy.

And then he added these extravagant words of praise for President Obama:

* "We Africans are happy, proud, that a son of Africans governs the United States of America.”

* “Obama is a glimpse in the darkness after four or eight years.”

* Qadhafi referred to Obama as “my son.”

* “We are content and happy if Obama can stay forever as president of the United States.”

The White House lightly brushed off the dictator's remarks with Obama himself making no statement. And the MSM, go figure, failed to cover Qadhafi's bizarre remarks at all.
Posted by DH at 12:28 PM