Up a "Moon River" Without a Paddle: Andy Williams on Barack Obama 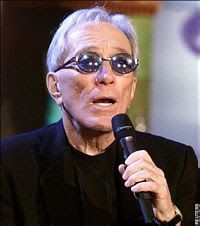 One of America's greatest singers, Andy Willams, was a good friend of the Kennedys, especially Robert who he supported in his run for the presidency. But Williams had some sharply contrasting opinions when asked about the current occupant of the White House.

Don't like him at all," he said, "I think he wants to create a socialist country. The people he associates with are very Left-wing. One is registered as a Communist. Obama is following Marxist theory. He's taken over the banks and the car industry. He wants the country to fail."

Hmm. I think I've found the fellow for tomorrow's tea break.
Posted by DH at 8:36 AM