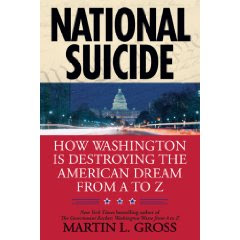 In Cal Thomas' column touting a new book by investigative reporter, educator and columnist Martin Gross (National Suicide: How Washington is Destroying the American Dream from A to Z), Thomas opens with these punch paragraphs:

Remember when the deficit was so bad that Democrats said we (or more accurately the Republicans) were placing a terrible burden on our grandchildren?

That was several trillion dollars ago. Democrats now appear perfectly fine with extending the growing deficit and national debt to their great-grandchildren. Perhaps politicians think they will never be held accountable three generations from now because they won't be around to explain to those not yet born why they refused to stop our financial hemorrhaging.

The Obama administration forecast a 10-year budget deficit projection of more than $7.1 trillion, but when confronted with figures from the pesky and bipartisan Congressional Budget Office, the administration was forced this week to raise that projection to approximately $9 trillion. That's $9,000,000,000,000 dollars. For most of us who think a $1,000 deposit in our checking accounts is a large amount and a $1,000 credit card balance is too much, $9 trillion is a figure that is almost beyond comprehension. It is certainly beyond defensible. To borrow a phrase used in another context by the House leadership, it is un-American...
Posted by DH at 7:15 AM