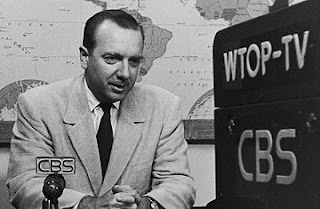 Before we put Walter Cronkite aside, Patrick B. Craine from LifeSiteNews has an important reminder for us about one of the seamier sides of Cronkite's liberalism.

Famed CBS news anchor Walter Cronkite has been lauded in the media since his death on Friday, at the age of 92, with tributes paid not only from secular media, but even Vatican Radio and other Christian news sources.

But while remembered by many as "the most trusted man in America," many of Cronkite's more radical, but lesser known views, would be considered repugnant even to many of his greatest fans.

For instance, up until his death Cronkite served as honorary chair of the Interfaith Alliance, an organization dedicated to countering the influence of conservative Christianity on federal politics. In 2007, the Alliance initiated a campaign to force Christianity out of the public sphere by promoting policies that would silence the Christian voice. They recommended that churches be prohibited from endorsing political candidates, that research and health policies should not be based on "religious doctrine," and that faith-based schools should be banned, among other things.

Part and parcel with Cronkite's campaign against religion in public life was his outspoken vocal support of abortion and same-sex marriage. In 2003-2004, for example, Cronkite wrote a column for King Features Syndicate, which was published in about 180 newspapers throughout the U.S. In the column he discussed 'Marriage and Abortion', expressing disregard for "conservatives" who oppose abortion and same-sex "marriage."

"It certainly is the right of the anti-abortionists and those who oppose gay marriages to defend, express and even propagandize their beliefs," he says, "but is it their right to impose their definition of morality on those who hold opposing views? The answer is a resounding 'no'. ... This columnist believes that among conservatives and liberals alike there is a majority who would put the sanctity of individual rights even above the sanctity with which some would endow the banning of abortion and gay marriage."...

In 1965, before abortion was made legal in the U.S., Cronkite made CBS the first network in America to feature a documentary on abortion when he hosted the hour-long episode of CBS Reports entitled 'Abortion and the Law', which can be found on the CBS News website.

The documentary claimed to tackle the controversial issue impartially, dealing with the "legal, moral and medical aspects," but in fact, it amounts to an hour-long argument in favour of legal abortion. Amidst a barrage of experts spouting the need for abortion and women giving horrifying testimonies about illegal abortions, Cronkite pays mere lip service to the pro-life viewpoint.

In his introduction, Cronkite states: "As long as the abortion laws remain unchanged, abortion will continue to be a critical problem, and for those involved, they call for desperate decisions that result in dangerous medical complications.

"Women have abortions for all kinds of reasons. The unmarried girl abandoned by the father of the unborn child, the girl who'd rather not have a child than marry the baby's father, but 80% of the women who have criminal abortions are married. They're women who feel they cannot afford another child, or fear they are too old to bear another baby, or that the baby may be born abnormal."

At one point Cronkite introduces a doctor who is supposed to speak on the emotional effects of abortion, but while mentioning the trauma of losing one's child, the doctor emphasizes the emotional impact of having to obtain an illegal abortion in secret.

Towards the end the documentary discusses the status of abortion in other countries, including in Europe, Asia, and South America, and ending in Chile, with Cronkite describing the horror of illegal abortion there. According to Cronkite supposedly 1 in 4 Chilean women had had an abortion, while the documentary shows (in decorous 1965 fashion) the death of a woman from an illegal abortion.

"What happens in Chile is no different than what happens to thousands of women in the United States," Cronkite warns, "who are hospitalized each year because of post-abortion complications.

"While men of science, and law, and theology talk about medicine, and legality, and morals," he says, "hundreds of thousands of pregnant women, unmindful of what may happen to them, secretly and fearfully seek abortions. For them, there is a wide gulf between what the law commands and what they feel they must do."

Cronkite concludes, "We believe the moral, medical, social, and economic aspects of abortion should be opened to public discussion, for if changes in the law are advisable, this can only be done by the American people themselves. This is Walter Cronkite for CBS Reports. Good night."
Posted by DH at 10:26 AM