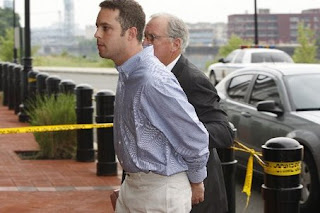 Have you heard the one about the rabbi, the politician, and the international money launderer?

The New Jersey Star-Ledger has the story here -- and sadly, it's no joke.

A New Jersey assemblyman and the mayors of Hoboken and Secaucus were among public officials arrested this morning by FBI agents in an international money laundering and corruption probe that includes rabbis in the Syrian Jewish communities of Deal and Brooklyn.

A total of 30 people have been taken into custody, officials said.

The arrests are the result of a two-year FBI and IRS probe that began with an investigation of money transfers by members of the Syrian enclaves in Deal and Brooklyn. Those arrested this morning include key religious leaders in the tight-knit, wealthy communities...

Agents also raided religious institutions to make arrests and collect information...
Posted by DH at 10:09 AM