A Lot of Government Leads to a Lot of Crooks 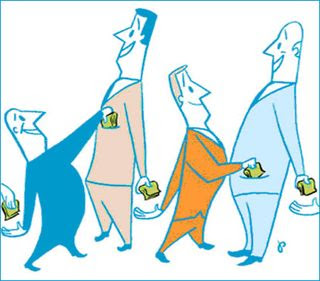 Sandy McClure, co-author of the book “The Soprano State: New Jersey’s Culture of Corruption,” agrees that big government is a big reason behind the state’s corruption problem. “You have all these little authorities that everyone has to go to for permission,” she says. “Too much government means too many opportunities for officials looking to cash in. And there’s no way that the press can keep track of it all.”

Ms. McClure is right: The more extensive government’s reach, the more opportunities the governing class has to steal from and shake down the productive class...

The point is that politicians and officials have more to sell in an environment of high taxes, big spending and overregulation—the same things that help explain New Jersey’s anemic economic growth and job creation. When government gets too big and complicated for businesses to get their permits and approvals and funding honestly, the dishonest prosper. And the honest get fed up and flee...

The Wall Street Journal's take on the latest New Jersey corruption scandal makes for intriguing (and alarming) reading.
Posted by DH at 11:33 AM