Congressman Conyers: Why Do I Have to Actually Read What I Vote On? The Aides and Lawyers Will Tell Me What to Do. 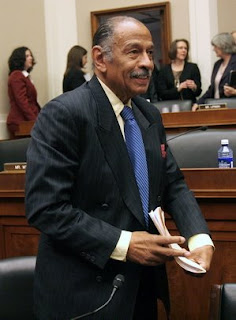 During a speech at the National Press Club the other day, House Judiciary Chairman John Conyers (Democrat from Michigan), wondered aloud why Congressmen should be expected to read the bills they vote on.

Said Conyers in a remarkable admission, “I love these members [that] get up and say, 'Read the bill.' What good is reading the bill if it’s a thousand pages and you don’t have two days and two lawyers to find out what it means after you read the bill?”

Betsy Newmark comments: "So I guess that the excuse is that, since they can't read it or understand it, it's fine just to let the House leaders (who probably haven't read the whole thing either) reassure you that the whole thing is just fine. At least some representative's aides somewhere have read some part of the bill so that should be enough, right? Who says that when you're rejiggering over one-sixth of the US economy and incurring massive future debt that you need to know what it is you're voting on."
Posted by DH at 11:22 AM