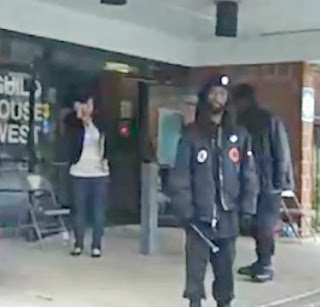 About that deeply troubling malefaction committed by Obama's Justice Department last month in which it dismissed the voter intimidation case against the New Black Panther Party for their harassing, blocking, nightstick-weilding antics in front of a Philadelphia polling place. Jennifer Rubin reports in the "Contentions" section of Commentary that the affair may not be over after all.

The U.S. Commission on Civil Rights has now taken up the issue and sent a letter to Loretta King, Acting Assistant Attorney General of the Civil Rights Division, demanding an explanation. By a vote of 4-0 (with one member abstaining for reasons not yet clear), the Commission members voted to send the letter seeking to get to the bottom of this. After setting out the facts which gave rise to the original Justice Department complaint, the Commissioners explain:

"Though it had basically won the case and could have submitted a motion for default judgment against the Party and its members for failing to respond to the Division’s complaint, the Division took the unusual move of voluntarily dismissing the charges against all but the defendant who waived [sic] the nightstick. Yet even as to that remaining defendant, the only relief the Division requested was weak - an injunction prohibiting him from displaying the weapon within 100 feet of any polling place in Philadelphia. It has since been revealed that one of the defendants had been carrying credentials as a member of, and poll watcher for, the local Democratic committee."

The Commissioners write that the previously announced efforts by the Justice Department to play an aggressive role in enforcing voting rights “ring hollow if they are not accompanied by swift, decisive action to prosecute obvious violators.” The Commissioners ask that the Civil Rights Division advise the Commission of the rationale for dismissing the charges against defendants and of its evidentiary and legal standards for dismissing certain charges in cases of alleged voter intimidation.” They further ask for information on “any similar cases in which CRD has dismissed charges against a defendant.”

What is even more remarkable in this already eye-popping story is that an independent commission has been forced to take this matter up because the relevant oversight committees in Congress have failed to hold a single hearing concerning the matter. One would think those in Congress who squawked so loudly about alleged failure in the Bush administration to enforce civil rights laws and who objected so strenuously to “politcization” of justice by appointees meddling with the work of career attorneys would have shown more interest in the matter.
Posted by DH at 10:11 AM